The Victoria Line is part of the London Underground system and is a deep-level line running from south London (Brixton) to north-east London (Walthamstow Central). It is coloured light blue on the Tube Map and is the most intensively used line on the network, in terms of how many passengers it carries per annum. It is the only line on the Underground, except for the two-stop Waterloo & City Line, where the entire line is operated underground, with the only section of track to emerge above ground being the route to the depot from Seven Sisters to Northumberland Park.

The official opening ceremony took place at Victoria station on March 7 1969, The Queen unveiled a commemorative plaque on the station concourse. After a short ceremony, she purchased a 5d (five old pence) (2.08p) ticket and travelled to Green Park. Princess Alexandra opened the Brixton extension on July 23 1971, also making a journey from Brixton Station to Vauxhall.

Trains run every two to two and a half minutes during peak periods. In normal service, all trains run from Brixton to Seven Sisters, roughly two out of three continuing to Walthamstow Central Station.

The Victoria line is served by a fleet of 47 8-car London Underground 2009 Stock. Each is made up of two four-car units. The line is equipped with an Automatic Train Operation system (ATO); the train operator (driver) closes the train doors and presses a pair of "start" buttons, and if the way ahead is clear, the ATO drives the train at a safe speed to the next station and stops there. This system has been in place since the line opened in 1968, making the Victoria line the world's first full-scale automatic railway. Although the system was tested on the Tube on a smaller scale before that, initially on a short section of the District line; then a larger trial was carried out on the Central Line between Woodford Station and Hainault Station.

The line's original 1967 Stock trains were used until mid-2011, and were withdrawn in favour of the 2009 Stock as part of the Victoria line modernisation programme.

When the Victoria Line was constructed, severe budget restrictions were imposed and as a result the station infrastructure standards were lower than on older lines and on later extension projects. Examples of these lower standards include narrower than usual platforms and undecorated ceilings at Walthamstow Central Station, Blackhorse Road Station and Tottenham Hale, adversely affecting lighting levels. At most stations between the up and down escalators there is a concrete staircase where an additional escalator could be installed, but hasn't been fitted, which can cause severe congestion at peak times. In addition, there have been station closures for safety reasons, when both escalators have been unserviceable. Over many years, heavy equipment has been installed in unsightly fenced-off sections at the ends of platforms owing to the lack of anywhere else to install them. It is not clear from Transport for London's Investment Programme whether these shortcomings are likely to be remedied.

Supporters of Tottenham Hotspur (and the club itself) have campaigned for a surface station to be opened next to Northumberland Park Station, adjacent to the line's depot. This would provide an improvement in transport links, seen as essential if the club's wish to redevelop their ground and increase crowd capacity is to become a reality. The idea was looked into but Network Rail own the necessary land and need it for their own expansion plans.

If the Chelsea-Hackney Line or Crossrail 2 is built then it will relieve a lot of congestion on the Victoria line, offering an alternative route across Central London between Victoria and King's Cross. 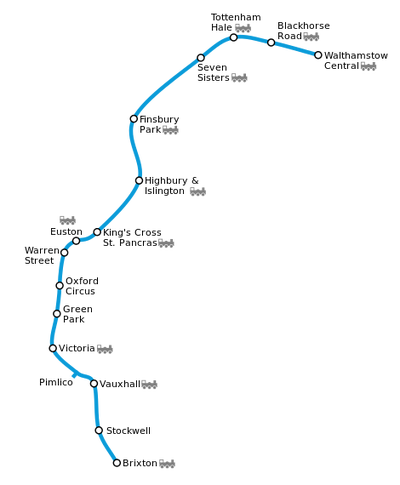