The line has a complicated history and the current complex arrangement of two northern branches, two central branches and the southern branch reflects its genesis as three separate railway companies that were brought together and combined in the 1920s and 1930s. An extension in the 1920s used a route originally planned by a fourth company and abandoned plans to extend the line southwards in the 1920s and northwards in the 1930s would have incorporated parts of the routes of a two further companies. From the 1930s to the 1970s, the tracks of a seventh company were also managed as a branch of the Northern Line. 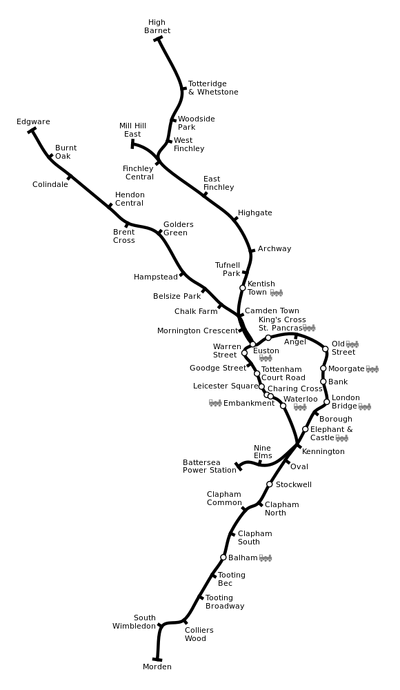 (Also known as the City Branch.)

All Northern line trains consist of London Underground 1995 Stock and are in the distinctive Underground livery of red, white and blue. In common with the other deep-level lines, the trains are the smaller of the two sizes used on Underground. The 1995 stock is quite comfortable when compared to the older stock used on other lines. 1995 stock sports automated announcements and quick-close doors. Bicycles are only allowed on trains to High Barnet after East Finchley (including the Mill Hill branch). They are also allowed between Golders Green and Edgware, but not between Hendon Central and Colindale.

In 1975, the Northern City Line, known by that time as the Highbury branch, became part of British Rail; it is now served by First Capital Connect.

In the 1980s and 1990s the line was nicknamed the "Misery Line". In 2003, a train derailed at Camden Town. This damaged points and signals and the junctions there were not used while repairs were underway — trains coming from Edgware worked the Bank branch only, and trains from High Barnet and Mill Hill East the Charing Cross branch only. This situation was resolved when the junctions reopened, after much repair work and safety analysis and testing, on 7 March 2004.

A joint report by the Underground and its maintenance contractor Tube Lines concluded that poor track geometry was the main cause, and that, because of the geometry, extra friction arising out of striations (scratches) on a newly installed set of points had allowed the leading wheel of the last carriage to climb the rail and so derail. The track geometry at the derailment site is a very tight bend and tight tunnel bore, which precludes the normal solution for this sort of geometry of canting the track by raising the height of one rail relative to the other.

On 7 July 2005, a defective train on the Northern line (causing its subsequent suspension) saved the Northern line from the London Bombings on that day. Three trains on the Circle and Piccadilly lines were not so lucky. The fourth bomber instead boarded a bus, which he later blew up.

On 13 October 2005, the entire Northern line service was suspended due to maintenance problems with the emergency braking system on the trains. A series of rail replacement buses was used to connect outlying stations with other Underground lines. A reduced service was reintroduced on 17 October 2005, and full service was restored on 18 October.

In October 2006, service to/from Mill Hill East was cut back to a shuttle, except during peak hours, and a few weekend trains.

From June 2006, the service between East Finchley and Camden Town has been suspended for two non-consecutive weeks every month, with service on the Edgware branch suspended for the other two weeks. This is part of Tube Lines redevelopment of some Edgware and High Barnet Branch stations, including replacement of track, signals, as well as station maintenance. This includes refurbishment of all High Barnet branch stations running from West Finchley Station down to Camden Town Station.

In June 2008, Treasury Holdings, owners of Battersea Power Station, announced proposals for an extension of the Northern line from Kennington to Battersea Station in Battersea to serve a redeveloped power station site. Construction on this branch started in 2017 and was completed in 2021.

TfL's Transport 2025 - Transport vision for a growing world confirms their ambition to split the Northern line into two segregated routes. Running trains between all combinations of branches, as is currently done, means only 22-25 trains per hour can run on each of the central sections, because merging trains have to wait for each other at the junctions. Segregating the routes will allow 30 trains per hour on all parts of the system. However, Camden Town Station would need to be rebuilt before this could be implemented, as the current station would not be able to cope with the increased number of passengers changing trains there. LUL have however had problems gaining planning permission for the redevelopment plans.

Splitting the line operationally in two could lead to one or both being renamed and given a different colour on the tube map. All trains on the Charing Cross branch would terminate at Kennington, and it has long been suggested that the line could be extended from there to points southeast.

The Northern line was scheduled to switch to automatic train operation in 2011, using the same SelTrac system that was introduced on the Jubilee Line in 2009, and that is already in use on the Docklands Light Railway.

The Thameslink Programme upgrade should relieve congestion on the Northern Line by transferring passengers to heavy rail services.