Edit
watch 01:36
We're Getting Mutants in the MCU - The Loop
Do you like this video?
Play Sound

The Metropolitan line is part of the London Underground, coloured Magenta on the Tube map. It was the first underground railway (or subway) in the world, opening on January 10, 1863 (however, parts of that initial section are no longer served by the Metropolitan line, but by the Hammersmith & City, District and Circle Lines). The main line runs from Aldgate in the City of London to Amersham, with branch lines to Uxbridge, Watford and Chesham. For the initial section of the line the rails are in tunnel for much of the way; beyond Baker Street, just beyond Finchley Road the line runs in the open. Out of the 34 stations served, only 11 are underground. It is now the least used line on the Underground for its length of track; ironically it is the oldest line and initially covered the bulk of the Underground system. Today it is the ninth busiest line on the network.

The four-track layout for part of the distance — between Wembley Park and Moor Park — allows for the running of express or "fast" services to the outer suburbs. Baker Street is the terminus for some trains, with others continuing into the City to Aldgate.

It is the fastest line on the London Underground network - Before the late 1990s/early 2000s, the fast line north of Harrow-on-the-Hill was 70mph. However, the Metropolitan stock has now been limited to 50mph but the stock is still the fastest. Line speeds have dropped accordingly with the majority of the line north of Finchley Road limited to 50mph, and where National rail services run on the line it is 60mph.

The current rolling stock in use on the Metropolitan line is the S8 stock which replaces the previous A stock trains. It was introduced around 2010 and in the next few years the A stock was slowly withdrawn. Since the sub-surface tunnels can disperse the air, the S stock is the first stock on the London Underground to be fully air conditioned. Also, automatic train operation will be available on the line once the signalling has been upgraded. 58 trains of S8 stock operate as well as one “S7+1” eight-car S7 stock train. While S8 stock has partial transverse seats to bear a resemblance to A stock trains, S7 has only longitudinal seating. Also the S stock features automated announcements and information displays neither of which featured on the A stock.

The S stock’s predecessor was the A60 and A62 stock. While it ran in service with unpainted aluminium bodywork for many years, since refurbishment the stock has received the now standard white and blue Underground livery, with red ends. Metropolitan line services are usually formed of two four-car units coupled together for a total of eight cars, although the Chesham shuttle service was served by four-car trains until it was replaced by direct trains from Chesham to London. The East London Line was also served by A stock until its transfer to London Overground in 2007. 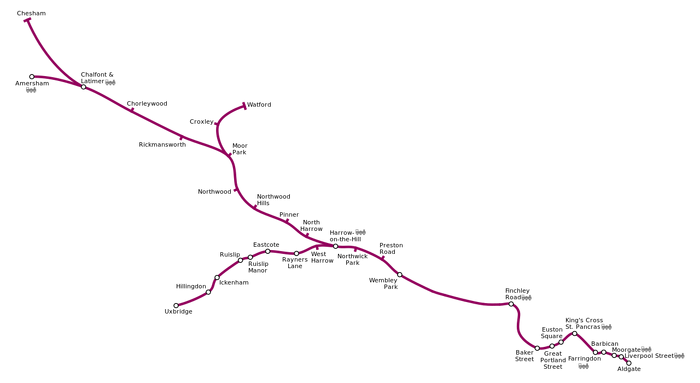 In order from east to west

At Harrow, the line splits into two branches — the main line to Watford, Amersham and the Uxbridge branch.

(continuing from Harrow on the Hill)

(continuing from Harrow on the Hill)

After Harrow-on-the-Hill the lines are re-arranged into two parallel pairs, the slow (the northerly pair) and the fast. The fast lines are also shared with the National Rail line to Aylesbury (operated by Chiltern Railways) which had hitherto run parallel. The stations between Harrow-on-the-Hill and Moor Park (exclusive) only have platforms on the slow lines, and can only be stopped at by slow and semi-fast services, which usually run to Watford. At Moor Park the line splits, with the fast line forming the main line towards Amersham and the slow line heading off towards Watford.

(continuing from Moor Park - a triangular connection also exists, allowing trains to run between Watford and Rickmansworth, and there are a few early-morning/late-evening services that do this).

Stations between Rickmansworth and Amersham are also served by most Chiltern services to Aylesbury.

Here trains either continue to Amersham or, on a separate branch to Chesham. At other times there is a shuttle between Chalfont & Latimer and Chesham, which involves a change from Amersham trains.

The Metropolitan line, unlike other London Underground lines, operates express services (the Piccadilly Line runs a fast service between Hammersmith and Turnham Green/Acton Town, but the intermediate stations are served by the District line, and so all Piccadilly Line trains stop at all regular Piccadilly line stations on their route, in the same way as the Metropolitan by-passes Jubilee Line stations between Finchley Road and Wembley Park). Fast services, usually to Amersham, call at Baker Street, Finchley Road, Wembley Park, Harrow-on-the-Hill, Moor Park and then all stations. There are also semi-fast services, usually in the peak, which use the fast stopping pattern as far as Harrow-on-the-Hill, but then run all stations, usually to Watford.

The current off-peak service pattern is as follows:

London Underground have proposed reducing the service to Amersham from 4tph to 2tph, while Chesham will be served by 2tph to London.

During peak hours the services vary much more. Trains can run through from Aldgate to any destination, and each terminus gets a mixture of fast and semi-fast – which generally don't stop at Wembley Park – and all stations services. Through trains also run between Chesham and London. There are also a few early-morning/late-evening trains from Rickmansworth to Watford.

This is the only line not to have any interchange with the District Line since much of the Metropolitan Line has been taken over by the Circle and Hammersmith and City lines.

Transport for London and Hertfordshire County Council are developing plans to divert the line from the current Watford station and re-route it over the disused Croxley Green branch line to Watford Junction.

It was envisaged in 2005 that the link would be operational by 2010, but difficulties in securing funding caused the project to be postponed.

The current Watford station is located in a housing estate by Cassiobury Park, rather than serving the centre of Watford. Should the project go ahead, the station would close. A new station would be provided at Ascot Road and Watford West would be refurbished and reopened.

As part of a wider overhaul of the Sub-Surface Lines, there are also plans to run through Metropolitan line trains from Uxbridge to Barking. This would be to replace Hammersmith & City Line services which would be curtailed or withdrawn as part of the Circle Line re-organisation. However, this would only be possible after the delivery of new rolling stock, which is due to arrive from 2009, as there are a number of gauge infringements which mean that the Metropolitan line's A stock trains are banned east of Aldgate.

In May 2008 a TfL review of the Metropolitan Line saw a proposal to change the train times for Amersham Station and Chesham Station. The peak hour trains 0700 to 0800 and 1800 to 1900 would not be affected.

Currently only two trains each peak period run direct between Baker Street and Chesham The recast of services would see this increase to two trains per hour all day. This is because passenger numbers to Chesham have been rising since 2006, and Amersham is served by Chiltern Railways anyway.

Because of the extra trains going to Chesham there would only be 2 trains per hour to go to Amersham instead of the 4 trains per hour now. The Chiltern Railways services having 2 trains an hour (except on Sunday when they only run 1 train an hour) would not be affected.

North of Baker Street there is a noticeably long gap until the next station at Finchley Road. This section once had three stops on it, all of which closed when a nearby stretch, now part of the Jubilee Line, was opened in 1939. There have been recent proposals to re-open or construct a new Metropolitan station on this section, tied in with the main Line out of Marylebone which has a similarly long gap. A new station could provide a valuable interchange between the two, as well as serving the surrounding district, possibly in the vicinity of Lord's cricket ground which was once served by its own Lord's tube station which closed in 1939. This is unlikely to happen in the near future, despite recently announced redevelopment of the ground.