Edit
watch 01:36
We're Getting Mutants in the MCU - The Loop
Do you like this video?
Play Sound

The Jubilee line is a line on the London Underground coloured silver on the Tube Map, in the United Kingdom. It was built in two major sections - initially to Charing Cross in Central London, and later extended in 1999 to Stratford in East London. The later stations are notable for their larger size and safety features (both being attempts to future-proof the line). Out of 27 stations served, 15 are below ground. It is the sixth busiest line on the network.

When the Jubilee line was opened, it was operated by London Underground 1972 Stock. In 1984 this was partially replaced by the new London Underground 1983 Stock, the displaced 1972 Stock being transferred to the Bakerloo Line. The 1983 Stock proved to be unreliable and troublesome in service, with single-leaf doors making passenger loading and unloading a slower process than on other stock with wider door openings. With the construction of the Jubilee line Extension, the opportunity was taken to introduce new trains, and today the line is worked by London Underground 1996 Stock, which is similar to the London Underground 1995 Stock in use on the Northern line. The new stock has internal displays and automated announcements to provide passengers with information on the train's route - at first they simply listed the destination of the train, and subsequently also listing the name of the next station and interchanges there. Subsequent modifications also made the text scroll across the internal display instead of just appear in it.

The line was constructed to enable a branch extension to be built eastwards from North Greenwich to Thamesmead. At present there are no plans to construct this branch route.

Plans were put forward in 2004 for a West Hampstead Interchange, to connect the three West Hampstead stations in one complex, but this proposal has not been approved. 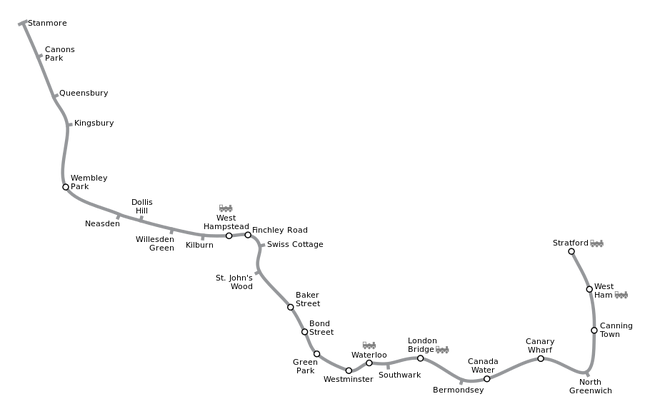