The Central line is a line of the London Underground and coloured red on the Tube Map. It is a deep-level "tube" line, running east-west across London, and has the greatest total length of track on the Underground. Out of the 49 stations served, 24 are below ground. It is the second busiest line on the Underground.

When opened in 1900, the railway was operated by electric locomotives hauling coaches. The coaches were fitted with gates at each end, similar to those used on the City and South London Railway and the Glasgow Subway. The locomotives, with a large unsprung weight, proved highly unsatisafactory and the cause of considerable vibration. They were replaced as early as 1903 with motor cars, with the existing coaching stock being adapted to run as trailers within newly formed electric multiple units.

By the 1920s the rolling stock was in need of modernisation or replacement. Given that the then-new London Underground Standard Stock was too large to work in the line's tunnels, it was decided to modernise the existing fleet. The end gates were removed and replaced by an extension to the passenger accommodation. Two air operated single-leaf sliding doors were inserted into both sides of each carriage. Reconstruction work was carried out by the Union Construction Company at Feltham.

Additional trains were purchased for the opening of the Wood Lane to Ealing Broadway extension in 1920. These were also temporarily used on the Watford extension of the Bakerloo line.

The Epping-Ongar branch was not electrified until 1957, prior to which the service was operated on behalf of London Transport by British Railways using steam hauled coaches. Upon electrification, two-car sets of London Underground 1935 Stock were initially used, later replaced by 4-car sets of 1962 Stock specially modified to cope with the limited current. The section closed in 1994.

In common with virtually all other Underground lines, the Central line is worked by a single type of rolling stock. The London Underground 1992 Stock as introduced gradually from April 1993 to February 17 1995, and was the first in London to introduce automated announcement of the next station and connections available. The 1992 stock is painted in the standard red, white and blue Underground livery and runs in 8-car sets.

In 1996 the line was fitted with Automatic Train Operation, and this was brought into service in sections over the next few years. 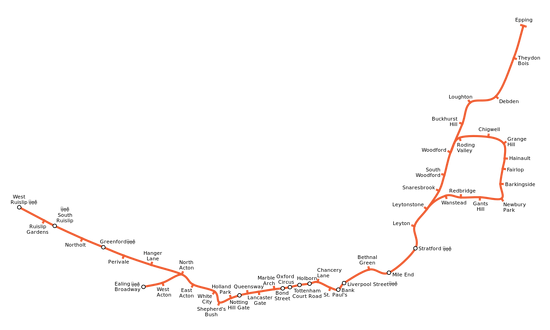 In order from west to east. Note that the station names in italics are no longer on the Central line

this was the main line until the post-war extensions

The Greater London boundary with Essex is at Grange Hill

Terminates at Woodford [see Ongar Branch] (except for rush hours)

Note: the remaining stations to Ongar were served by a shuttle service from Epping.

The developers of the First Central business park at Park Royal, West London were planning a new station between North Acton and Hanger Lane. This would have served the business park and provide a walking distance interchange with Park Royal station on the Piccadilly Line. This is not currently being actively pursued.

If the Chelsea-Hackney line is built then it is intended that it will take over the Epping branch of the Central line. Current hopes are that this will be completed by 2025.

It would be possible to provide an interchange with London Overground at Shoreditch High Street station which is due to open in 2010 but current thinking is that the disadvantages to existing passengers outweigh the benefits.

On the 11 May 2008 a petition for the government to fund London Underground for the re-extension of the Central line to Ongar via North Weald opened. Proposals for the stations to bring more revenue are in planning. The deadline for signing the petition is the 11 December 2008. It is available to sign online [1]