The Bakerloo line is a line of the London Underground, coloured brown on the Tube Map. It runs partly on the surface and partly at deep level, from the Elephant & Castle in south-east to Harrow & Wealdstone Station in north-west of London. The lines serves 25 stations of which 18 are underground. It is the seventh busiest line on the network.

When opened in 1906, the Bakerloo line was operated by Gate Stock trains, built at Trafford Park, Manchester. To cope with the extension to Queen's Park, 12 extra motor cars of the London Underground 1914 Stock were ordered, ten from Brush of Loughborough and two from the Leeds Forge Company.

To operate services north of Queen's Park, 72 additional cars were built by the Metropolitan Carriage, Waggon and Finance Company of Birmingham. These trains, known as the Watford Joint Stock, were partly owned by the Underground and partly by the London and North Western Railway (later LMS). They were initially painted in LNWR livery. They were not equipped with air-operated doors and proved slow and unreliable, so they were replaced by new trains of Standard Stock in 1930 (although a few were retained by the LMS). For some years in the 1930s Watford trains had a distinctive blue stripe at window level.

In 1932, some carriages that had been built for the Piccadilly line by Cammell Laird in Nottingham in 1919 were transferred to the Bakerloo line. When built, these had been the first Tube trains to be have air-operated doors. These (and other trains) were later replaced by more trains of Standard Stock, in turn being replaced by 1938 Stock and 1949 Stock.

The Bakerloo line is now operated entirely by Mark 2 1972 Stock, displaced from the Jubilee line by 1983 Stock. The stock is maintained at Stonebridge Park depot.

All Bakerloo line trains are painted in the distinctive London Underground livery of red, white and blue and are the smaller size of the two sizes used on the network, since trains travel deep underground in small tunnels.

The interiors of these trains have recently been 'deep cleaned' and the upholstery has been replaced by a more appealing blue. The seating layouts are longitudinal and transverse, with some cars having longitudinal seating only.

These trains are currently scheduled for replacement in 2018 as part of the London Underground PFI. 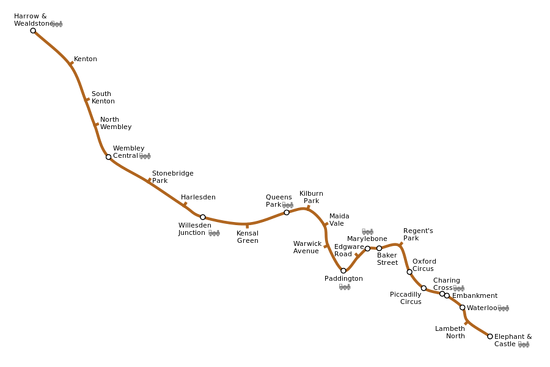 The section of the line between Harrow & Wealdstone and Queen's Park runs along the Watford DC Line, serving stations owned by Network Rail, but managed by London Underground. National Rail fares, as well as TfL fares, apply to journeys on this section.

All of the stations here are situated in cuttings, however some of the track between the stations are either on the surface or even in small tunnels.

Between 1917 and 1982, Bakerloo line trains continued along the DC line past Harrow & Wealdstone to Watford Junction. These stations continue to be served by London Overground.

There are currently three depots serving the Bakerloo line. The main depot is at Stonebridge Park. Opened April 9 1978 on the site of a former British Rail power station, it handles the maintenance of the line's fleet. There are two smaller depots. The original depot at London Road (near Lambeth North Station) is still in use. The Bakerloo is the only line on the Underground to run trains in passenger service through a depot - at Queens Park - where the depot is situated immediately North of the station. The depot sheds were completed late in 1915 where some of the trains are stabled.

When Bakerloo line services ran to Watford, there was a depot at Croxley Green. This depot closed in November 1985.